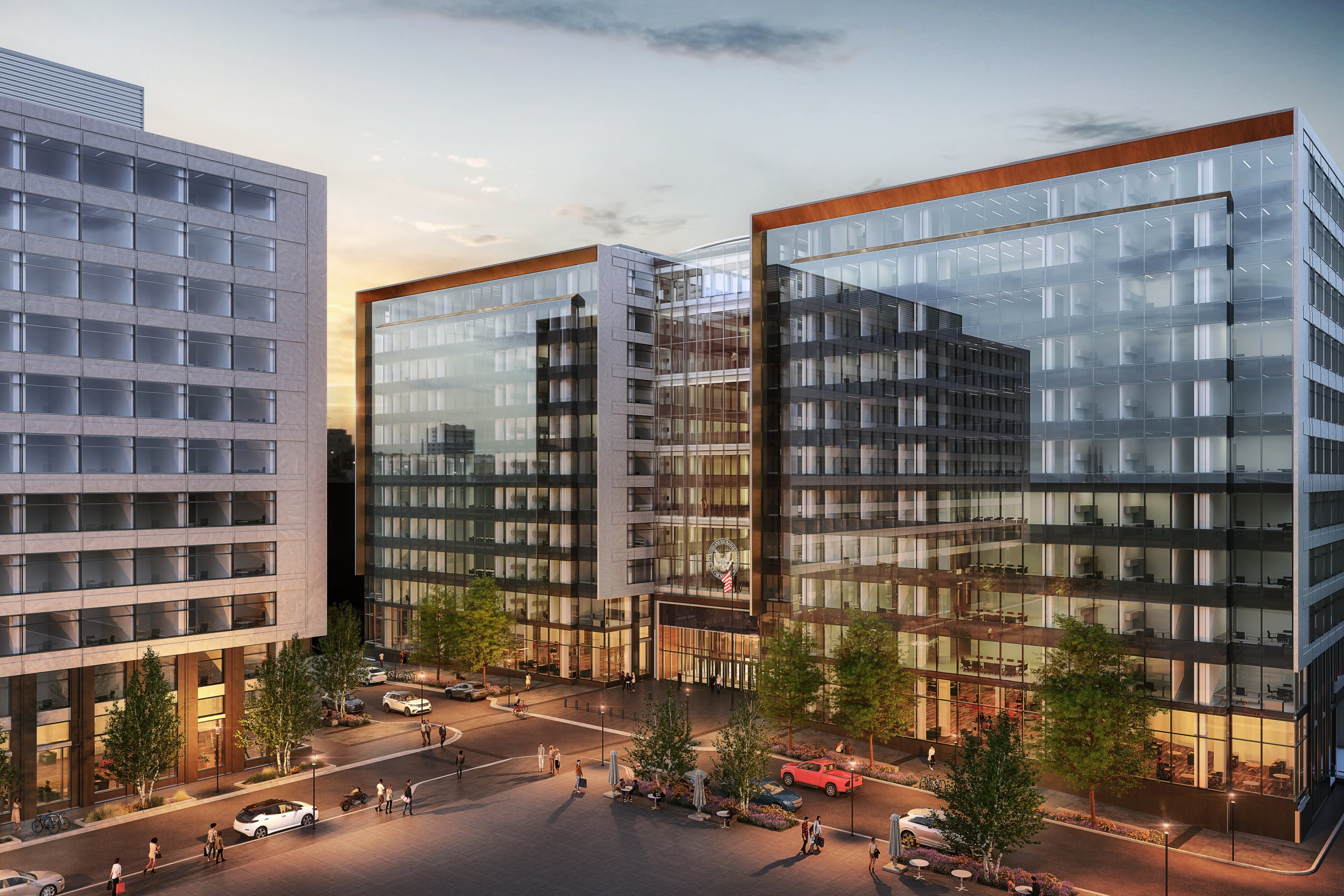 Washingtonian has partnered with CoStar, the nation’s largest provider of commercial real estate information and analysis. Below is the 2021 CoStar Power Broker Awards. The awards recognize the top commercial real estate brokers and companies in the Washington, DC market, based on completed sales and rental transactions beginning in 2021. CoStar verifies and analyzes total transaction volume to identify winners.

As the prime broker for Downtown Reston and Downtown Columbia, Transwestern’s Alexander Hancock has an insider’s view of what employers – and their employees – want from a suburban work experience. The days of generic office parks are of course long gone. To entice employees back into an office, Hancock says, companies seek dynamic environments where people can walk to stores, lunch and happy hour, as well as access outdoor space during the workday. Proof that Reston and Columbia fit the bill, he says, lies in the strong leasing activity that continues there even as the office market as a whole has floundered during the pandemic.

Over the past two years, Hancock and his team have landed several high-profile tenants in Reston Town Center. In the summer of 2020, Microsoft seized 400,000 square feet in the new Freedom Square Trophy 2 building. Volkswagen and Fannie Mae also recently leased large swaths of the glass towers called Reston Next. Starkist moved its US headquarters to Reston from Pittsburgh this year. Another strategy the development’s owner, Boston Properties, deployed during Covid, Hancock says, was to build “specific suites” — an ideal move-in-ready option for businesses looking to downsize into a smaller space and cheaper. Hancock says he rented 20.

After spying on Hancock’s success in Reston, the Howard Hughes Corporation—the company that orchestrated the massive redevelopment of downtown Columbia—hired him to its hire team as well. Hancock says a major draw for Columbia employers is obvious: new office space surrounds the Merriweather Post Pavilion. On concert days, workers can hear bands warming up; in good weather, they can enjoy the park setting.

“Companies are realizing that setting up [in locations like Reston and Columbia] gives them proximity to a large base of highly skilled workers,” says Hancock. “They give them an office experience and also shorten their commute from the suburbs.”

The government’s decision to move the Securities and Exchange Commission from Capitol Hill to a new headquarters at NoMa — valued at more than $1.3 billion and comprising nearly 1.3 million square feet — was by far the biggest 2021 lease. Not only that, but it’s the second-largest deal in city history (behind only the Department of Transportation’s 2007 lease of nearly 1.5 million square feet at Navy Yard).

Brian Sullivan, managing director of JLL, conducted negotiations for Douglas Development, owner of the future SEC headquarters at New York Avenue and North Capitol Street, Northeast. Neil Levy, David Lipson, and Todd Valentine, all from Savills, teamed up with Kevin Terry of the General Services Administration to represent the government.

Sullivan says he and his client knew it would be a battle to lure the SEC from its current headquarters next to Union Station, especially to a NoMa location north of New York Avenue, further away than office users are. traditionally gone. So they brought in architectural firms Gensler and HOK to create renderings of what they envisioned for the huge site (which developer Douglas Jemal had spent nearly 20 years assembling from individual lots). The glass-filled design included far fewer interior desks, meaning workers would have much better access to exterior views and natural light. “We designed it with a little ‘wow’ effect, so when the agency saw it, they’d be excited,” Sullivan says.

Even so, the deal has encountered numerous additional hurdles, including a challenge in federal court from the current owner of the SEC. But finally, after years of work, the new lease, lasting 15 years, with an option to extend for another decade, was finalized last September. The SEC is expected to move in 2026.

The next gastronomic destination

If you want to know what’s going on with Washington’s restaurant scene, just ask Constantin Gogos. As a long-time broker for family-owned retail rental company Papadopoulos Properties, he’s become one of the first calls for restaurateurs looking for new space. Although it might be hard to believe, given the glut of empty storefronts in the area, Gogos will tell you that Chevy Chase is on the verge of becoming a legitimate dining destination. “You start to have a tidal change,” he says.

In 2021, Gogos managed Common Plate Hospitality’s takeover of the former Anthropologie and PF Chang’s from Chevy Chase. The group is transforming the roughly 10,000 combined square feet into Heights Food Hall, which will include eight food stalls, a speakeasy and a full-service location of Urbano Mexican Restaurant (which has existing locations in Alexandria and the Mosaic neighborhood). Just across Wisconsin Avenue at the Collection at Chevy Chase, Gogos helped the restaurateurs behind Seven Reasons and Imperfecto secure space for their next venture, Joy by Seven Reasons, a more laid-back take on the 14th arrondissement dining destination. Seven Reasons Street. (He also made the Imperfecto deal for them last year.)

A little further east at the Chevy Chase Lake development, Gogos represented the duo behind beloved Nina May’s Shaw restaurant. The couple will open a seasonal all-day American restaurant called Elena James, with an attached market. And that’s not all: Gogos recently helped them find another space, this one near Chevy Chase Circle, for a third concept, details of which are yet to come.

It has also been busy with business within the city, including Lost Generation Brewery, soon to open in Eckington; Mez Mesa, a spot promising “world cuisine” and cocktails near U Street; and a Greek restaurant on 19th and N streets in Dupont. All of the action at Chevy Chase, however, reflects a trend that Gogos — along with many other brokers — have felt since the pandemic began: The suburbs have gotten hot.

The University of Maryland recently recorded a major gain in its ongoing efforts to make College Park one of the top college towns in the nation, in large part due to the work of KLNB. Matt Skalet. One of the leasing brokers at Aster — a $140 million mixed-use project near the south end of campus, slated to open later this year — he helped attract a range of new businesses coming to the neighborhood soon: Crunch Fitness, Roots Natural Kitchen and Bandit Taco, to name a few. But the most transformative tenant Skalet has found is one that promises to attract customers from campus and far beyond: the first Trader Joe’s in Prince George’s County. “The purpose of the Aster was to activate and energize the south side of campus,” he says. “Trader Joe’s was the perfect tenant.

Although news of the grocer’s impending arrival wasn’t confirmed until June, Skalet and his team began negotiations in the spring of 2019 – a not particularly easy time, you may recall, for convince retailers to commit to a new location. Despite the raging pandemic, Skalet says its customers (Bozzuto, University of Maryland’s Terrapin Development, and Willard Retail) have been able to make various changes to the site to accommodate Trader Joe’s requirements, such as increasing the number of seats parking spaces allocated to the store. Skalet expects several more retailers to commit to the Aster by the end of this summer and the development to be 90% leased by the fall. As for Trader Joe’s, he says the grocer intends to open in time for Thanksgiving.

Marisa M. Kashino joined Washingtonian in 2009 and served as editor until 2022.